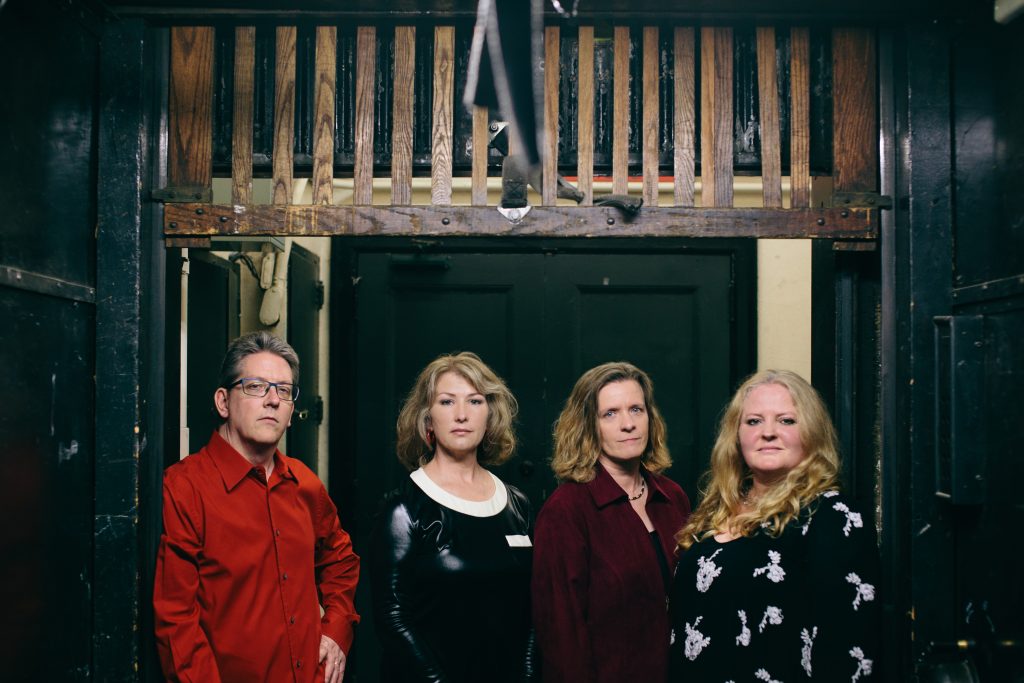 Lauded for providing “a once-in-a-lifetime experience for adventurous concertgoers,” Zeitgeist is a new music chamber ensemble comprised of two percussion, piano and woodwinds. One of the longest established new music groups in the country, Zeitgeist commissions and presents a wide variety of new music for audiences in the Twin Cities and on tour. Always eager to explore new artistic frontiers, Zeitgeist collaborates with poets, choreographers, directors, visual artists and sound artists of all types to create imaginative new work that challenges the boundaries of traditional chamber music. The members of Zeitgeist are: Heather Barringer, percussion; Patti Cudd, percussion; Pat O’Keefe, woodwinds; Nicola Melville, piano. 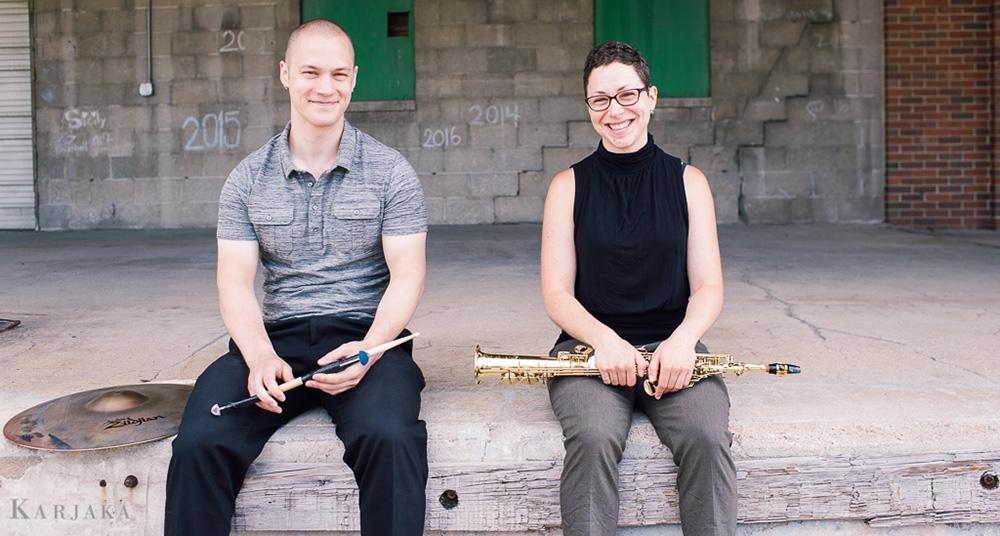 Mutually interested in exploring a wide range of contemporary genres, Noa Even and Stephen Klunk formed Patchwork, a Cleveland-based saxophone and drum set duo that collaborates with composers to build an eclectic body of new music for their unique instrumentation. The duo has been described as demonstrating “astonishingly tight ensemble” (Mike Telin, ClevelandClassical. com) and “creating the effect of a hybrid solo instrument” (Jason Charney, I Care if You Listen). Since forming the group in 2013, Noa and Stephen have enjoyed the process of working with Osnat Netzer, Erin Rogers, Hong-Da Chin, Jonn Sokol, Eric Wubbels, Nick Didkovsky, Charlie Wilmoth, Dan Tramte, and other composers whose music reflects diverse influences and styles.

Patchwork has appeared on many college campuses, such as Peabody Conservatory, Ball State University, College-Conservatory of Music (University of Cincinnati), Washington University, and Kenyon College, where they frequently combine performances with composer readings, master classes, and presentations. Noa and Stephen primarily perform in the Rust Belt region, but have also brought their music to audiences in Toronto, Chicago, Boston, New York City, and Omaha. In August 2017, they were in residence at the Avaloch Farm Music Institute to collaborate with composer Hong-Da Chin on a new work. 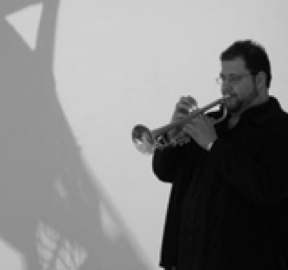 Trumpeter Scott McKee has earned acclaim for his performances in both his hometown of Cleveland as well as across all of North America. He has appeared as a trumpeter with Tito Puente Jr., Aretha Franklin, The Temptations, Johnny Mathis, Guy Lombardo’s Royal Canadians, Clark Terry, Bobby Shew, Ernie Krivda’s Fat Tuesday Big Band and the Cleveland Jazz Orchestra.

Currently Scott is living and freelancing in his native Cleveland and can beseen regularly as a member of MOJO: The Generations Big Band and The Sammy DeLeon y su Orquestra. 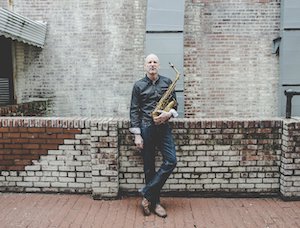 Bobby Selvaggio is one of the leading alto saxophone voices on today’s jazz scene. In the words of pianist Kenny Werner, “Bobby is among the best of players out there,” and legendary saxophonist Joe Lovano praises Bobby by calling him “one of the few young saxophonists on the scene today that captures you with his strong presence, focus, and sound.”

Bobby, who grew up in the Cleveland area, earned his Bachelor of Music in Music Performance from Kent State University. He eventually moved to New York City and earned a Masters degree in Jazz Performance from the Manhattan School of Music. While in New York, Bobby studied with Joe Lovano, Bobby Watson, Dick Oatts, and Maria Schneider. 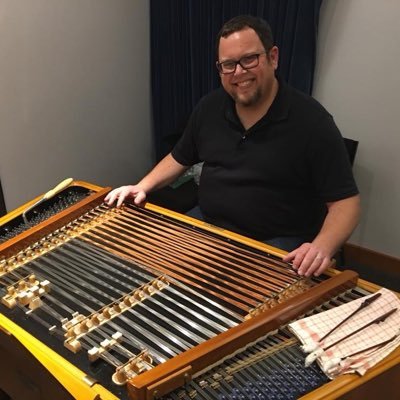 Acclaimed for his “unnerving dexterity” (San Francisco Chronicle), his “boldly played” (Los Angeles Times), “vivid” (The New York Times), and “expert” (St. Louis Post-Dispatch) performances as the solo cimbalom of John Adams’ Scheherazade.2, and praised by the NYT for the “brilliant clarity” of his performance of the featured cimbalom part within Mr. Adams’ The Gospel According to the Other Mary, Chester Englander has a thriving career as a percussionist and cimbalom artist with orchestras throughout the country.

Chester can be heard on the Cantaloupe, Capcom, Deutsche Grammophon, DisneyNature, Interscope, Naxos, Nonesuch, Seattle Symphony Media, and Ubisoft labels. Chester is also Director of Percussion Studies at Cleveland State University. He is a proud Artist Endorser of Pearl Drums/Adams Percussion and Freer Percussion Products. Chester and his wife, violinist Rachel Englander, are proud parents to their adorable daughters Charlotte and Alice. 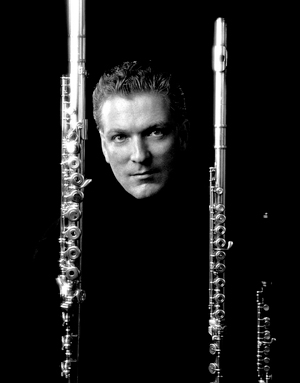 A ubiquitous presence in the world of modern flute for over 30 years, Carlton Vickers is internationally regarded as one of today’s most important performers of avant garde flute, in many instances, emerging as the authoritative performer of choice when it comes to the flute literature written in the last four decades. 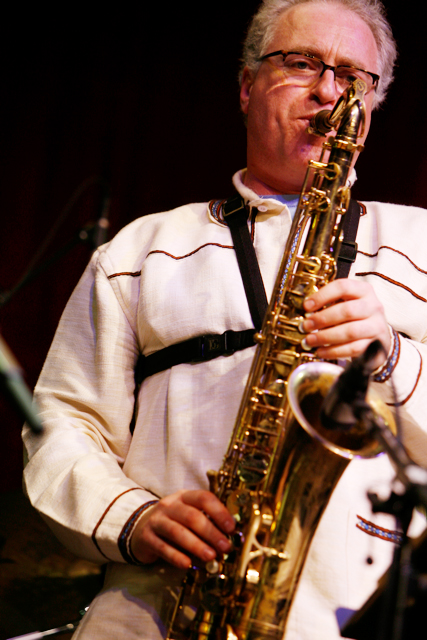 Russ Gershon is a saxophonist, composer, arranger, bandleader, record company founder and educator. Born in New York in 1959, he studied violin and piano as a boy and came of age as a music listener in the jazz clubs and lofts and rock, classical and jazz concerts of the 1970’s. Following periods as a student journalist and radio DJ, inspired by Rahsaan Roland Kirk and John Coltrane, he took up saxophone at age 17.

Moving to Cambridge MA to attend Harvard, where he eventually earned a degree in philosophy, Gershon continued as a disc jockey, producing mammoth “radio orgies” on subjects like Charles Mingus, Ornette Coleman and Chicago’s AACM. Along with a group of schoolmates, he was swept up in the punk revolution and formed a band, the Decoders, for which he and his colleagues began writing songs and recording, ultimately touring in the US and playing such venues as the Rat, CBGB’s and the Mudd Club. In 1982 he joined a punk pop group called the Sex Execs which became regional hitmakers in New England before dissolving in 1984.

Gershon has served as an visiting clinician or guest artist at numerous colleges including Cleveland State, Harvard and the Universities of Virginia, Vermont, Iowa, plus Wichita State, Berklee and New England Conservatory. He is presently teaching “Blues: Theory and Practice” at Lasell College in Newton MA, and basic instrumental skills and band at Johnson Elementary School in Nahant MA.